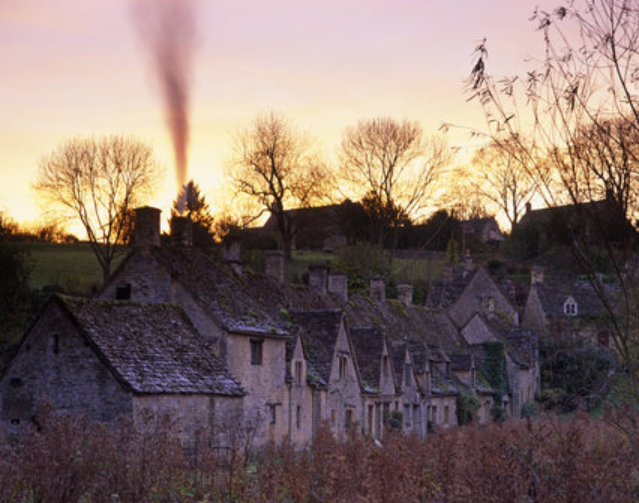 “Faith!” cried Susan, who loved to mimic her betters. “What a woman of the world I shall fancy myself living in London!”

Her mother, perched on the edge of a shabby sofa, burst into a fresh fit of weeping. “Heartless wench! How can you say such things with your poor father only buried these five days and the bailiffs at the door?” She wiped her eyes and proceeded to blow her nose noisily on the corner of her apron. “Believe me, Mr Parsons, we was never in such straits afore. Never!”

“Calm yourself, dear lady,” begged the attorney. “Miss Mary, be good enough to fetch your Mama a noggin of rum. Twill nicely stiffen her nerves.”

Mary obeyed, glad of something to do. Activity helped to dull the grief. She could not conceive of a life without Pa, who had been the sun of her existence, and did not know whether to envy or pity her sister who took it all in her stride. Two years ago, when the Cole finances were more threadbare than usual, Susan and Mary had been obliged to leave Mrs Clarke’s boarding school in Gloucester. Susan was rising sixteen and Mary eighteen months younger. Their home was rented and in order to attract high-class patrons (not notably the most prompt in settling their bills) Cole’s income had been stretched to give the business an illusion of prosperity it could not sustain. Mary had learned to cook and clean and sew and keep accounts in earnest. Billy was always ailing and Susan not as helpful as might be wished. Although she delighted in saucy backchat and was much at home behind the bar, she considered her talents quite wasted in that West Country backwater and lived for the day some well-heeled nobleman would come in off the highway with a craving thirst! Now, Mr Benjamin Parsons, whom Pa had long supplied with plump game and choice cuts of beef, had come in charity to disentangle William Cole’s affairs and make arrangements for the future.

His widow and Billy were to live with Ann Farren above the shop in Butchers' Row. From there, Mrs Cole could look about for nursing and sewing work to earn her keep. Meanwhile, lodgings had been taken for Susan and her younger sister in London where it was felt that opportunities of good posts in service would abound. Susan was unduly elated at the prospect of freedom, but Mary did not relish being a stranger in the city.

When she returned to the parlour, the stout lawyer was saying: “Your landlady, Mrs Fraser, is a God-fearing soul and will provide that strict moral guidance so essential in the absence of your own dear mother.”

“Lud, Mr Parsnip,” Susan brazenly disabused him, “we were never used to saying our prayers!” 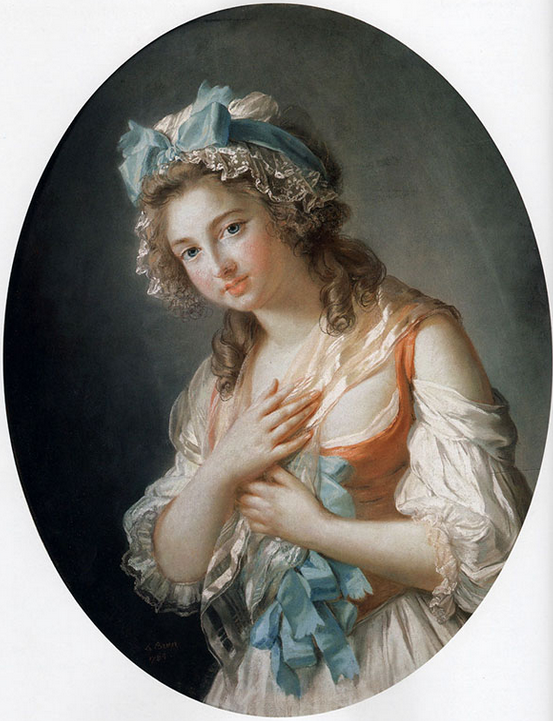 There she was wrong, for Mary was diligent in her devotions which were conducted in secrecy. This was partly to spare herself Susan’s scorn and partly because Catholic belief, in which their mother had been reared, was distinctly uncomfortable in those days when Culloden was a living memory and the Gordon Riots were daily currency. It had taken three Protestant kings from the Court of Hanover to quench notions of the Mother Church and make sure that Catholics did not combine and were kept out of Civil Office.

Billy sniggered at Susan’s cavorting and Parsons glowered as though he itched to put the rebellious young creature across his knee. He eyed Mary with a good deal of sympathy, wondering how two such dissimilar girls would fare on their own.

“Miss Cole,” he addressed Susan, for he was not disposed to call her by her Christian name and she was the elder, “you must understand that your chances of a position might be severely limited by the two of you remaining together. Perhaps...”

“What, live in separate households! Poor Mary would never contrive without me to protect her!”

Parsons' expression was that he scrupled to believe it. He regarded Mary with an enigmatic air which brought a disconcerted blush to her cheeks. “For a young lady of fifteen summers, she is uncommonly self-possessed.” This, Mary took to mean ‘strong-willed’ but later thought that she might have done him an injustice.

“I should prefer to stay with Susan, Mr Parsons. I don’t like to see our family further scattered.” 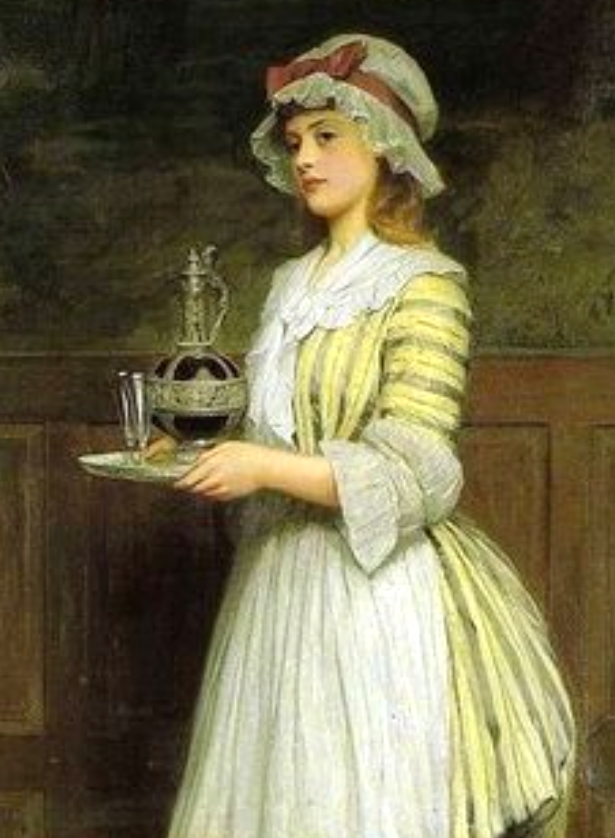 So the matter was settled and next day, wrapped in thick cloaks, the girls took up their bundles and climbed aboard the Gloucester stagecoach which left The Bell Inn at dusk. Economy seats on the outside had been booked but, providentially, two inside passengers failed to appear by the time the coach was due to leave and the sisters were able to beg seats under cover. A thin rain was falling and the tavern lanterns were creaking in the wind. Their mother sobbed and clutched Billy’s arm, determined that Fate should not snatch him also from her.

They travelled through the night at a fairly smart pace. The wheel-rims of the vehicle were extra wide. Coaches so equipped were granted freedom from tolls because they helped to compact the road surface. On the steeper inclines, every fit person had to pile out of the vehicle and trudge to the summit, being sure not to lag far behind. Clouds sped across the night sky as sleepy towns and villages rattled past in the opposite direction. Torchlight glistened on the rain-lashed windows filmed with human breath.

“I shall miss the ploughed red fields and the beechwoods in any season.”

“Fudge! Nothing exciting ever happens in Gloucester. We shan’t find dashing husbands there!”

“Husbands?” echoed Mary as though this were an alien notion.

“I despise Ann for throwing herself away on that shifty Farren. She’s a fine-looking girl and could have had a far better catch.”

“She will always eat meat.”

“Lord, how humble you are!”

“I would rather marry an honest tradesman than a wicked peer, even though he might cut up well.”

“Give me the wicked lord any day,” retorted Susan, “and I will teach him to do my bidding, wedding ring or not!” 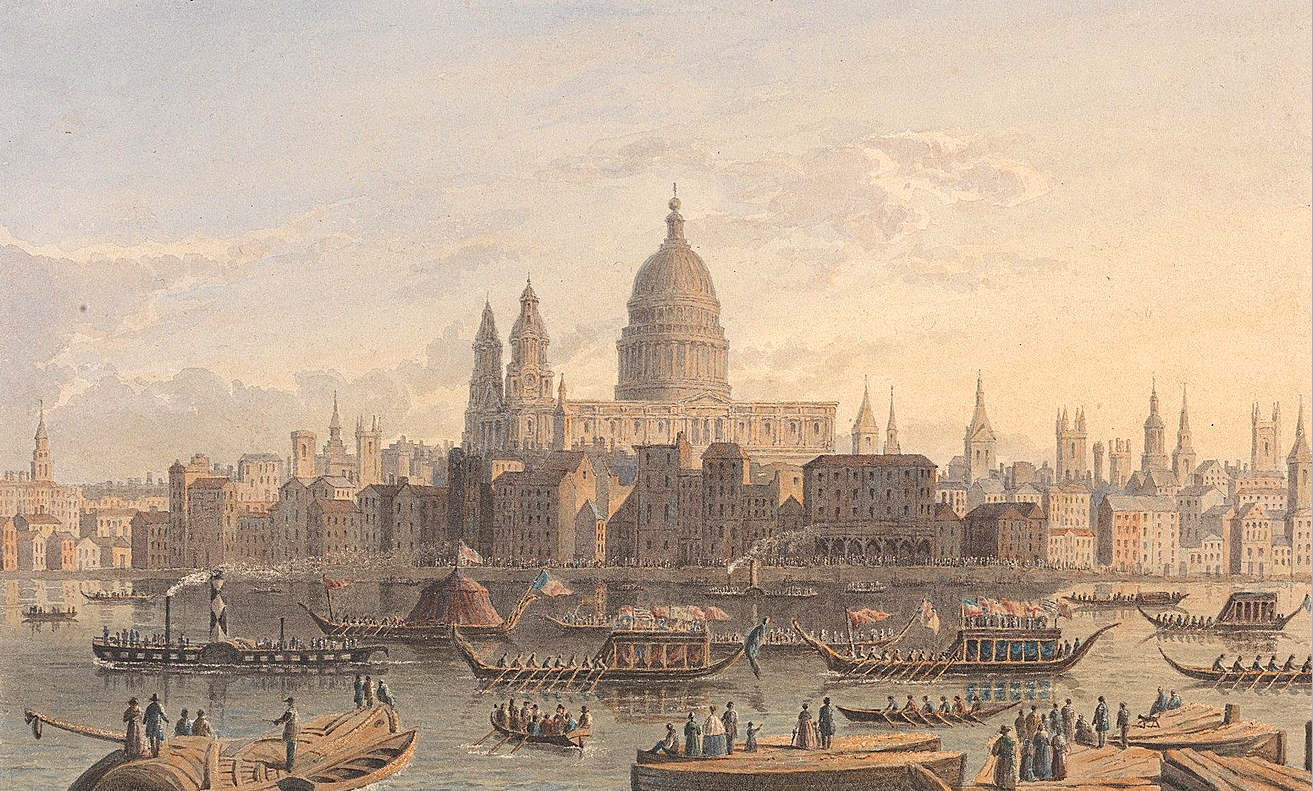 Mary wriggled uncomfortably, thankful that the faces of their fellow passengers were lost in shadow. The reek of musty leather, tobacco and unbathed bodies was stifling, but as the night wore on, they grew accustomed to it. At length, Susan dozed, but Mary could not. Only as dawn broke over Hounslow, suffusing the sky with opal beams, did the knot of apprehension inside her begin to dissolve. They had come through the storm and the windmill on the deserted heath stood motionless, towering above a cautionary gibbet. A fiery sun, like a link boy’s flare, kindled between the naked trees. Soon a dome gleamed through the far mist, and steeples craning above a miscellany of pantiles, thatch and crooked gables. Mary shook her sister. “Look! The city!” Susan squinted blearily through the mud-splashed window and promptly nodded off again.

The nearer they got, the slower their progress. The turnpike was choked with wagons of every description; dawdling cattle and panic-stricken geese were being driven to market between punishing goads. But, punctually, on the stroke of nine, the driver drew rein outside the Gloucester Coffee House in Piccadilly and, clutching their few possessions, the girls set foot on untried ground.

“I swear I shall faint from hunger and thirst before long,” Susan cried above the clangour. “Let’s find a cab to take us to Mrs Fraser’s.”

“Can we afford it?” asked Mary anxiously.

“In London one must do things in style!”

“We have lodgings to pay for.”

“Do stop fretting, Sis. We shan’t be in them above a couple of days. All these fine mansions must be clamouring for servants. Oh, did you ever see so many crested carriages!”

Young bucks of rank and fashion with powdered hair and embroidered coats were laughing and gesturing above the bull’s-eye panes of the Coffee House. While Mary was unnerved, Susan was mightily amused. A burly, weather-beaten Quaker who had journeyed on top of their coach, obviously used to the rigours of travel, kindly summoned a cab for them and informed the driver of their destination. Mary thanked him warmly. “God be with you, lass,” he whispered and gave her hand a reassuring pat. 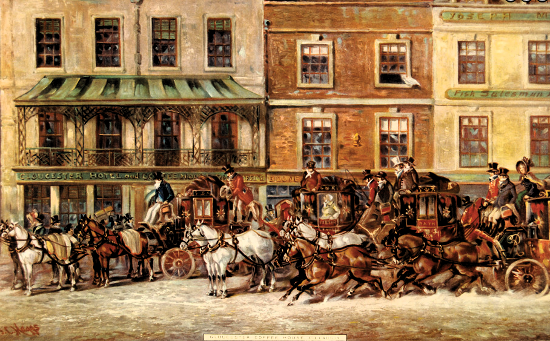