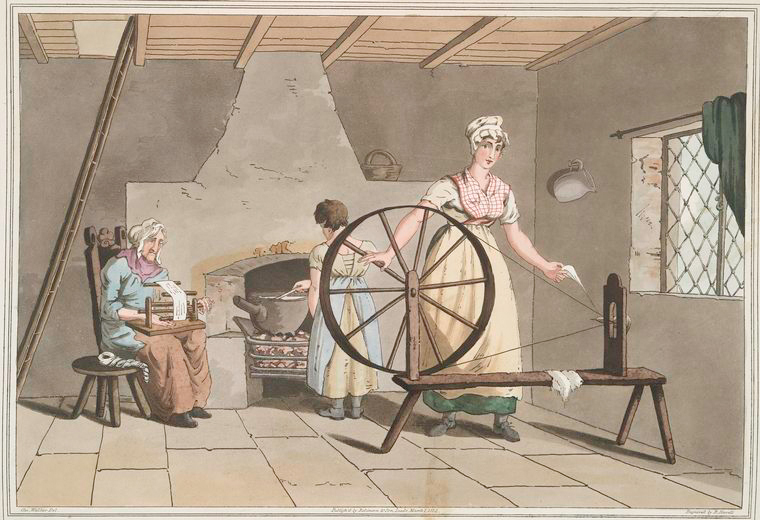 In 1779, the first Luddite riots broke out in a lace-making factory in Loughborough, Leicestershire, later spreading to the County Town. Losing the cottage industries for which the region was famed was one thing. The knitmasters and their machines was another...

In 1787, the low rumble of grievance which had gone on since the early seventies, caused by poor harvests and a dramatic falling-off of trade with America, erupted into fullscale revolt. The butt of their anger was a fast new worsted spinning machine developed by Joseph Brookhouse, a business colleague of Coltman's. The two men and a third party, Joseph Whetstone, Nonconformists all, had put their heads together to exploit the new invention which they believed could make the town the hosiery mecca of the world.

"They might as well chop off their own hands, this purblind mob!" stormed Brookhouse, pacing his oak-panelled office behind a firmly locked and bolted door. "Can they not see that our objective is to create wealth and secure employment for this benighted town?"

Outside, the winter night was crisp and the sky thickly broadcast with a frosty glittering of stars. A spirit of revenge had taken hold among the seething crowd in the street below and it would not be long before they were baying for blood.

"Would that Wesley were here. He would know how to quieten them," shuddered Coltman.

"Wesley does not strive with our problem," replied the other testily. "He cries his message and departs. Our livelihood, and theirs, if they could but grasp it, is at stake. They cling to their fear and ignorance like a talisman."

"Ay, there'll be little bread tomorrow, let alone dripping, if we cannot persuade them. Dear Lord, I wish that lad would make haste."

They had sent a porterhouse boy scurrying off with a note for the Mayor and the rabblerousers had begun laying siege to the door. A swelling bellow, like an injured and demented lion unleashed, filled the night, followed by a concerted thundering of labourers’ boots and clogs. "Come out! Come out, Brookhouse!" they chanted. "Let's see what you're made of!"

"Ye'll not shift us in a hurry!" bawled a rough-throated watchman, wielding a torch in menacing fashion. "We've got Whetstone's pad surrounded and if he don't do as he's bid, we'll turn the place over and dispose of him as neat as maybe."

Goaded now, Brookhouse rashly wrenched up the window and thrust out his head. "Hold your peace, Turnbull, you insolent brute! The Mayor and his henchmen are coming and will have you flung behind bars for insurrection."

Turnbull guffawed mockingly. "Hark at him, lads! Do ye hear? If my aim was as smart as his blether, I'd set the whole building ablaze and have done. Where is he, then, the Mayor? I don't hear His Worship's eager footfall on the path. He wants no truck with a bloody Liberal like you, Brookhouse. You and your ilk would jackboot him out of office as soon as look at him. He's a Tory diehard and he's on our side!"

"For God's sake, Joe, pull down the window and come away." pressed Coltman. "The loathsome fellow has a point, has he not? Where is the Mayor? He's certainly in no hurry to impose order on these streets."

His companion tugged at his necklinen and tossed it aside, panting angrily. "Politics makes strange bedfellows, to be sure." Leaning back against the wall, out of sight, he glanced at the longcase clock in the corner. "It is an unconscionable length of time - near five and forty minutes - since we despatched the serving-lad to the Mayor's chambers."

"The young scapegrace has probably run off with his shilling. Do you suppose he reached his destination?"

"It scarcely matters now. This uproar will be heard far and wide and those in authority will soon learn the cause of it." 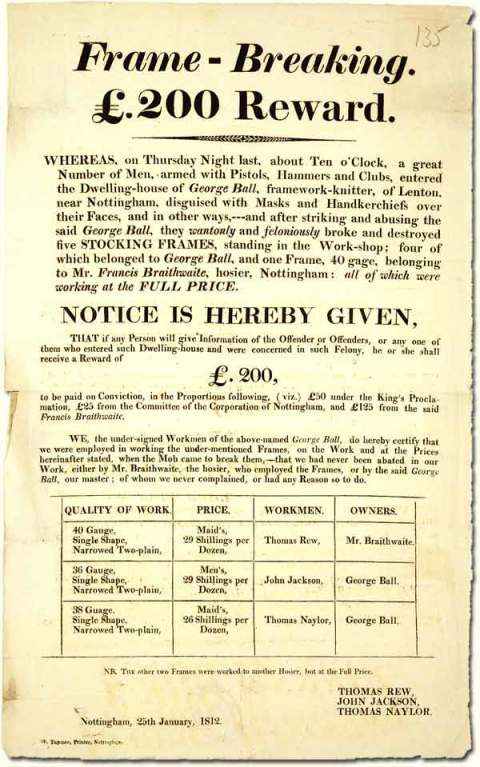 Just then, a pebble struck one of the small leaded panes, dead centre, and fractured it into a neat spider's web. The clamour abated into a handful of catcalls. "What the Hanover….?” Around the corner, the civic carriage, emblazoned with the town's crest, hove into view and rattled to a halt in Shambles Lane fifty yards or so from the master hosier's premises. A postilion jumped down and rushed to open the door so that His Worship in ceremonial finery could alight armed with his warning scroll. In a shaft of bronze light, the two comrades saw that he appeared more inconvenienced than wrathful. He was a corpulent, whey-faced figure, fond of his liquor and the trappings of his role. He had been summoned from a banquet and was keener to get back to his charlottes and syllabubs than to quell a riot. "Come, my lads, give over.... You've done enough, quite enough. Come, give over, there's good lads and go away!"

They had sent a mouse to bruise the head of a lion. The mob was in no mood for these inept babblings. It was as wild-eyed as a primitive beast.

A welter of protest broke out afresh. A grisly hulk of a man picked up one of the granite setts laid out for new paving and hurled it with olympian force toward the dignitary where it struck directly between his shoulder blades. The victim swayed, staggered and slumped to the ground while the crowd pressed in upon him with a heady mixture of panic and elation.

"Dear Heaven!" exclaimed Brookhouse, "I reckon they've done for him! Come on, Jack, now's our chance!"

"Tis madness, stark madness," quaked the other. Nevertheless, caution abandoned, they flew down the staircase, fumbled frantically with the doorlatch, and gained the pavement just as a pallet was being brought out of a nearby house to cart the casualty off to the infirmary. His writhing groans told them all was not lost. But the rebels had got their scapegoat and were momentarily stunned, until a sense of failure overtaking them, their blood rose again and they seized the opportunity to storm the hosier's house, battering window-frames, vaulting the sills, swarming through the open door and up the stairs, and with truncheons, bargepoles, gridirons, anything to hand, set about wreaking a frenzy of destruction, the blood-smeared Riot Act trampled to a pulp beneath their feet. 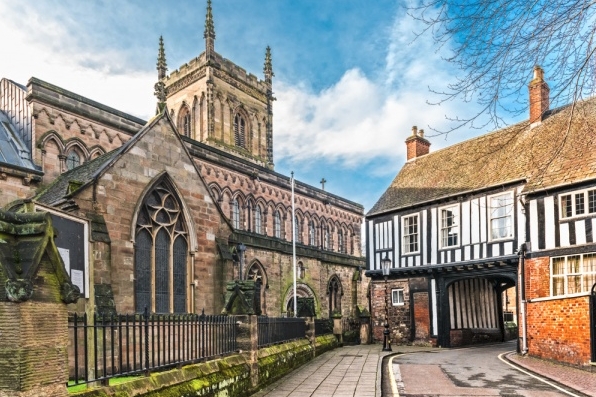 By the time it was borne in upon them that Coltman and Brookhouse had fled, the two men were absorbed in the mêlée outside and made good their escape across the Castle Yard toward the dimly illumined windows of St. Mary de Castro where some kind of Advent Mass was taking place. Tiptoeing into the incense-laden gloom, they sought sanctuary, quiet as mice, behind a pillar in the shadowy recesses of the ancient church, trying to still their rasping breath and thanking God for their fleetness of foot.

The service over, they dared to emerge. There were still echoes of disturbance around the streets, but it was quieter and an air of futility lay over the town, thick as fog. Every alehouse was packed to bursting, spilling its patrons, in various stages of inebriation, on to the pavement. News of the riot was on everyone's lips and the hosiers soon learned that some arrests had been made and that their confederate, Whetstone, had also had his house ransacked but had eluded the mob, like a true apostle, in a basket from an upper window. It was now common currency that he had applied to the Town Hall for protection in advance of the attack and had received none.

"This is an evil night's work," Brookhouse lamented with barely controlled tears when the devastation of Shambles Lane made its impact. "It is plain there is no future here for me and my machine."

"I am resolved to take it elsewhere - into a neighbouring county, I fancy - and let others reap their good fortune with it."

"But the whole industry will dwindle and die without it."

"Try telling them that!" cried Brookhouse, waving an arm at the ghost of the enraged throng. "Try telling the Mayor and Corporation. They were by no means keen to defend us, honest taxpayers or no."

"Perhaps Turnbull was right. They do fear our political muscle. But if we are a force to be reckoned with, we are gaining ground. You must stay and do battle, Joe."

"Indeed, I cannot. You forget that a full century has passed since the days when Dissenters were first allowed to hold municipal office, thanks to the Huntingdon family who have done so much to pave Wesley's way. A hundred years! And still it is an Anglican Tory stronghold. Ay, and likely to remain so until it becomes a democratically elected body. It is as clear as crystal that they dare not go against the will of the rabble if they are to keep a purchase on their power."

Coltman thought this a defeatist speech, but did not say so. "This town," he said sadly, "could be one of the jewels of England. Its pastures are the richest, its cheeses world-renowned, its mutton the envy of Smithfield. It has a thriving brick industry, its fine black Shire horses are the pride of the country's coaching routes, hosiery has rescued the pauper from beggary...."

"Yet is has no vision, no faith." Brookhouse restored a chair to its upright position amid the debris and sank into it, clutching his head in his hands. "The time has come for workers to adapt their skills. The days of the cottage knitting-frame are numbered. The future lies in large manufactories. If the knitters were not so stubborn, they would see it is the only way to ensure food on the table, shoes on the feet of their children, decent working conditions and, perhaps, reduced hours of labour. They demand a minimum wage of knitmasters like you and me, but how are we to guarantee that without changing our methods? The whole operation is patchy and unprofessional."

"First they must be persuaded that the machine is their friend. Since you are concerned about the welfare of the townspeople, have you not a Christian obligation to stay and do so?"

"Oh no, Jack, that is not my reading of the case at all. There is nothing Christian about clinging to the past. It is a way of faith. As New Testament disciples we are called upon to shake the dust off our feet, not cry in the wilderness. Leicester's motto is well chosen. Semper Eadem. 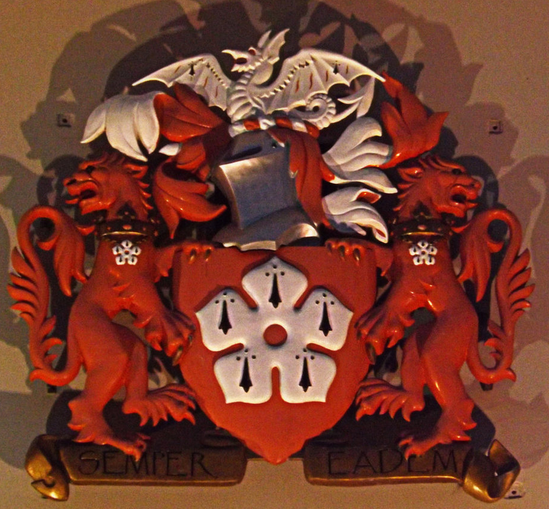