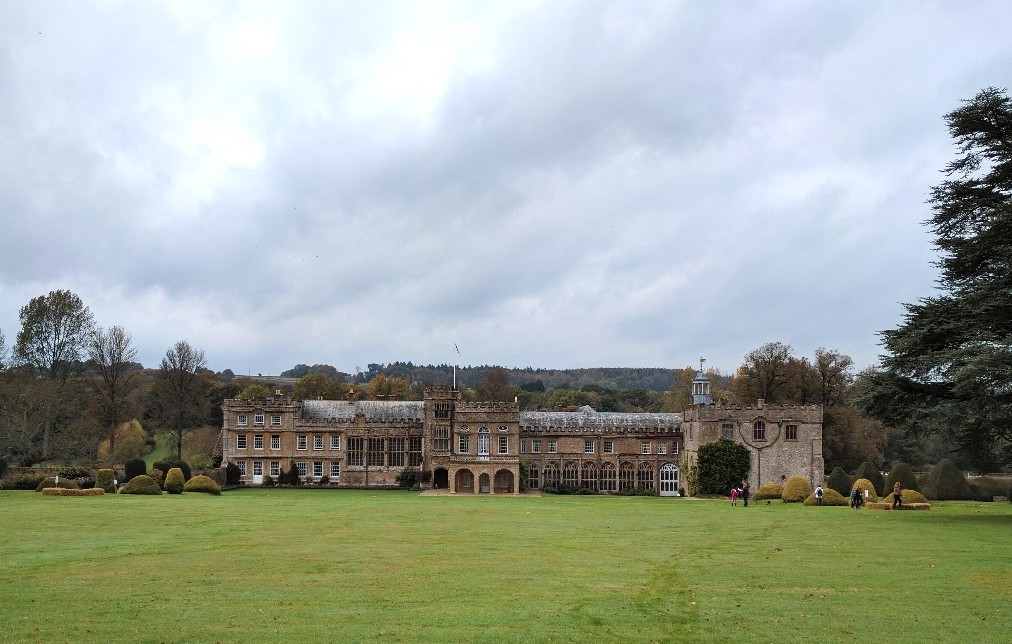 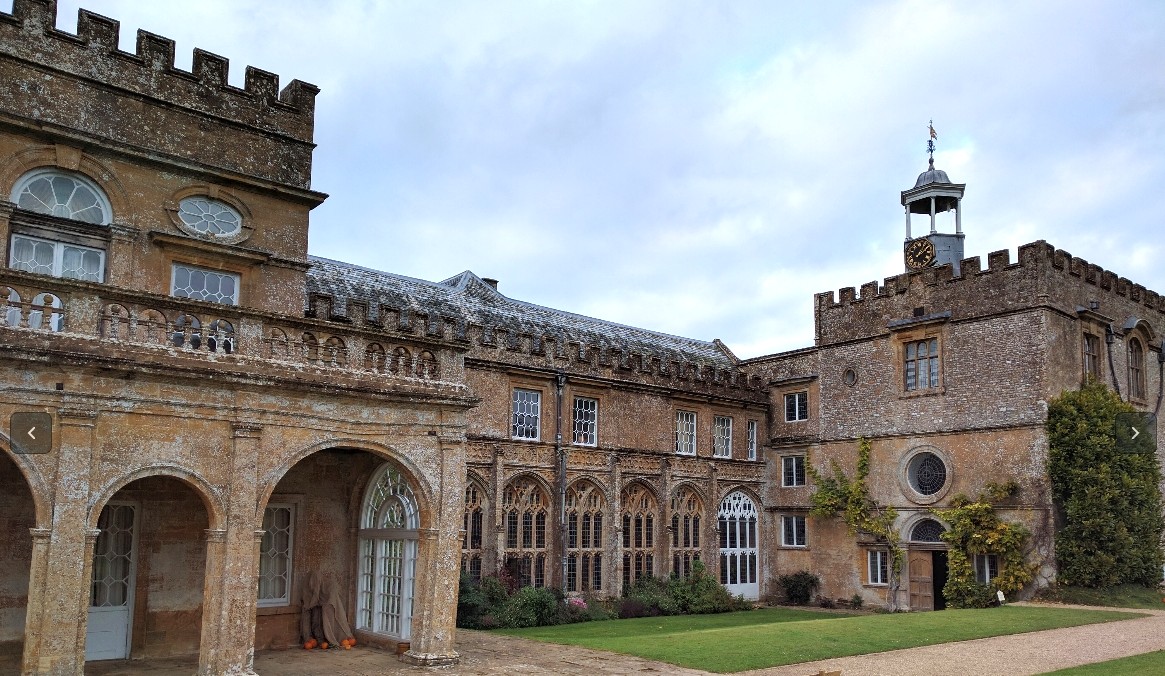 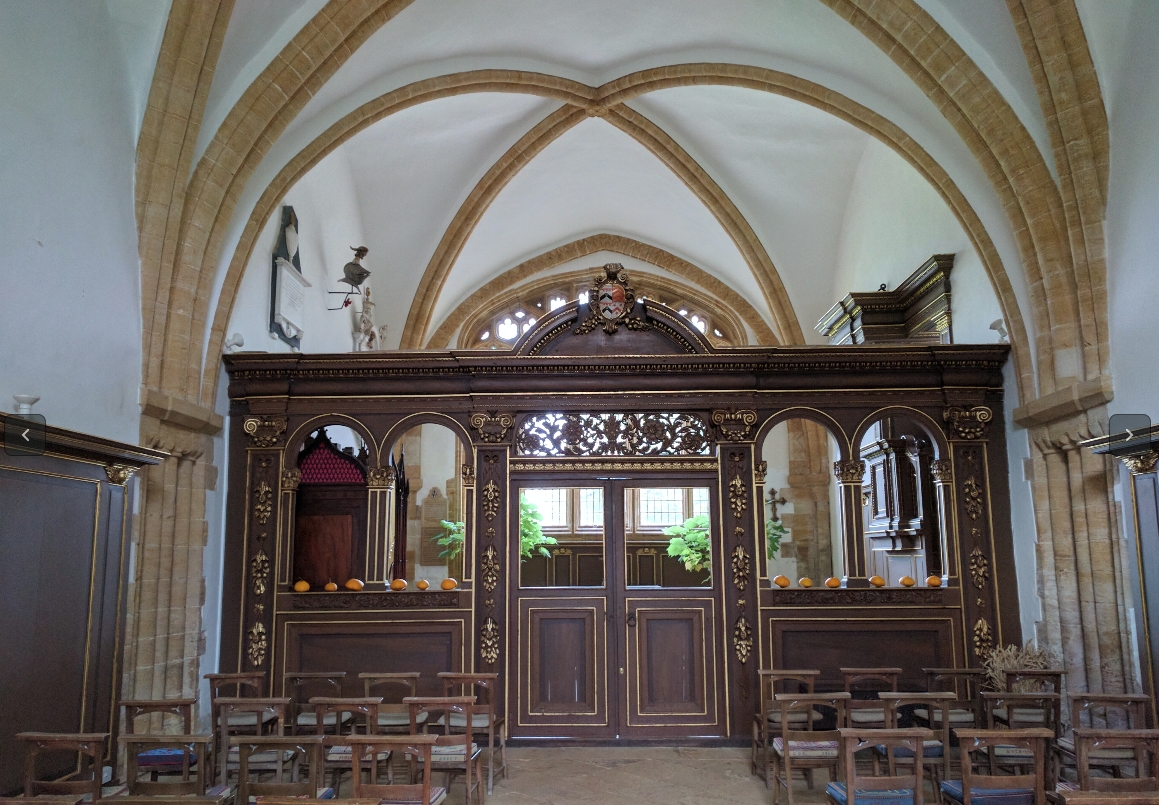 The Chapel (entrance on the right of previous image) 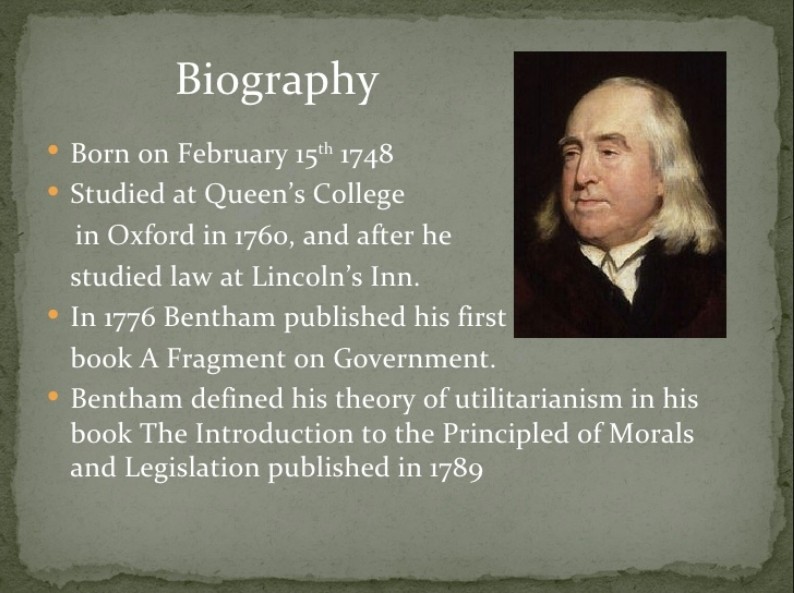 Born in February 1748 to a wealthy Tory household, Jeremy Bentham attended Westminster School and, later, Queen’s College, Oxford, where he graduated with a Masters Degree before training as a lawyer, though he never practised. He had a bright, incisive mind and was said to have studied history and Latin at his father’s knee. However, the intricacies of the English legal code, which he pronounced the ‘Demon of Chicane’ were to preoccupy him throughout his life and he campaigned for transparency and rights which applied equally to all sectors of society. In that respect he was leagues ahead of his time.

Described as lacking in empathy, Bentham’s deep concern for human (and animal) welfare was, perhaps, more cerebral than emotional. But it is recognised that such subjects may experience feelings on a level they are unable to process in the usual way. The observed results may distress them though the observed situation is matter-of-fact.

There is a passage in Michael St John Packe’s The Life of John Stuart Mill which describes Bentham’s visits as a young man to the seat of his patron, Lord Lansdowne, at Bowood House, Wiltshire, where jovial homage was paid to all the ladies. He was a figure as clownish and gauche as he was earnest and his heart was often cut to the quick by rebuffs. One lady seems to have taken pity upon him and, in old age, he recalled how she had ‘presented him, in ceremony, with a flower in the green lane’. He was so moved by the memory that any mention of Bowood brought tormented tears to his eyes, so that he was heard to protest: 'Take me forward, I entreat you, to the future – do not let me go back to the past.' 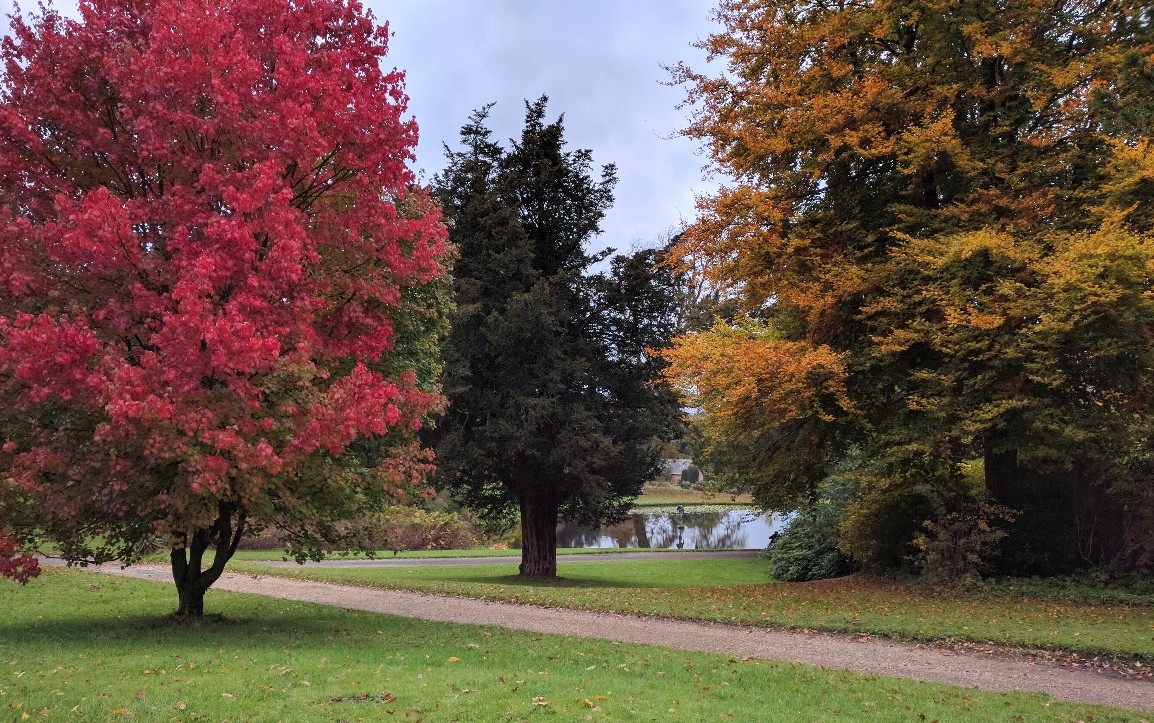 There certainly seems to have been no impediment to social interaction as a fully-fledged adult. Bentham enjoyed the company of the philosophical radicals of his day, so much so that he abandoned the confines of his London and Surrey dwellings in 1814 and rented Forde Abbey in what was then the county of Devon. It was a former Cistercian Monastery seized by the Crown in 1539 after Henry VIII broke with Rome. Sir Samuel Romilly, Solicitor-General and fierce opponent of slavery, had heard that the building had fallen into decay and was warmly surprised by its material comforts and cheerfulness. His wife, Anne, described it as a ‘most picturesque and magnificent place’. Here, their host could entertain his peers in style and comfort whilst they refined their vision for the future of the nation. Among them were David Ricardo, the economist, Francis Horner, Scottish Whig politician, Francis Place, a tailor, and Robert Owen, James Mill and his son, John Stuart Mill, reformers all. Mental stimulation and epicurean delight went hand in hand.

‘It is the theatre of great felicity to a number of people, and that not a very inconsiderable. Not an angry word is ever heard in it. Mrs S (the housekeeper) governs like an angel. Neighbours all highly cordial, even though not visited. Music and dancing, though I hate dancing. Gentle and simple mix. Crowds come and dance, and Mrs S at the head of them.’

Francis Place, his co-author, describes something of the tenor of life at Forde. The day began at eight in the morning. Bedtime was eleven-o-clock, after long hours of work in the Saloon. Their labours halted for a hearty breakfast at 9 am and after dinner at 5 pm there were long walks or games of shuttlecock and battledore in the Great Hall, before tea at around 9.30 pm.

The arcadian delights of woods, babbling brooks, rocks, sunny declivities, bowling greens and ‘hills of the Devonshire breed’ are variously recorded by his visitors. 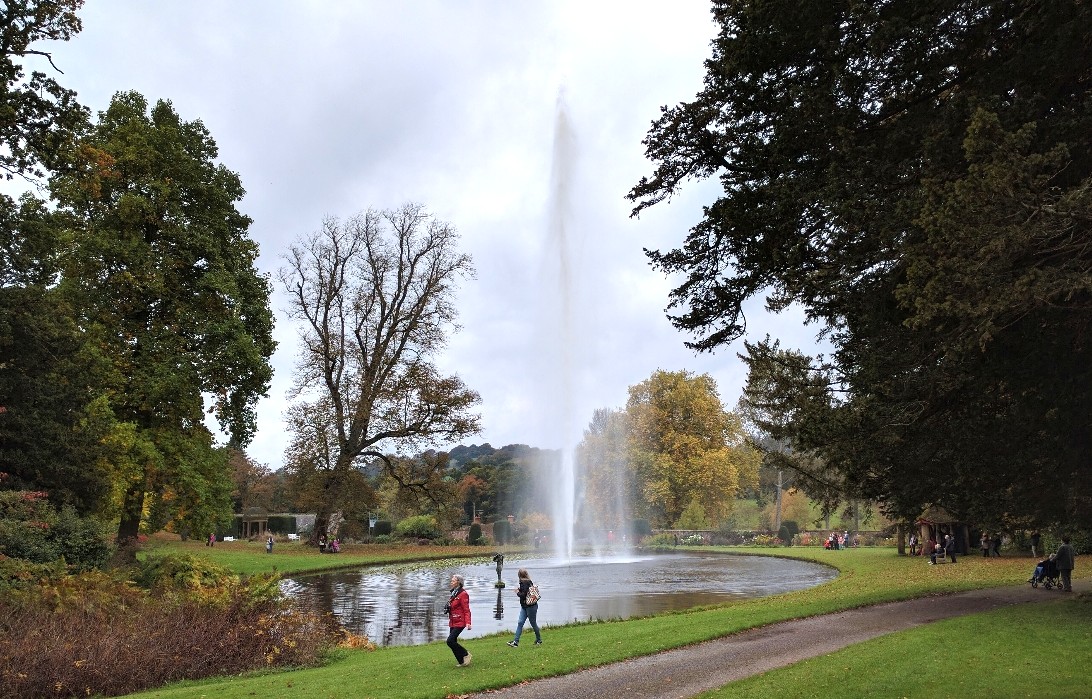 Bentham’s gospel of the greatest happiness of the greatest number as an index of ‘right’ and ‘wrong’ proved flawed since it presupposed that happiness was a universal condition that may be supplied through outward circumstances. Create the climate, follow the formula and the desired results will accrue. While this philosophy was honest, compelling and helped to enlighten the path to egalitarianism, it took little account of human nature or, indeed, who were the arbiters of the ‘common good’. There were those, even among his guests at Forde, who were annoyed that Place, the tailor, was treated on a par with themselves.

But there can be no doubt that Bentham’s motives were sound and that he contributed significantly to the early Victorian reform movement which hammered cracks in the cornerstone of a despotic Establishment. Many of his Utilitarian ideas were taken up throughout society at home and his influence was felt in Europe and America.

Bentham’s friends have recorded many of his eccentricities but surely the oddest and most macabre is that he willed his body should be preserved after death. (He is said to have kept the glass eyes for this purpose in his pocket for ten years!) The  mummification was carried out according to an ancient Maori method, but a wax head, made from his death mask, was resorted to when all did not go according to plan. 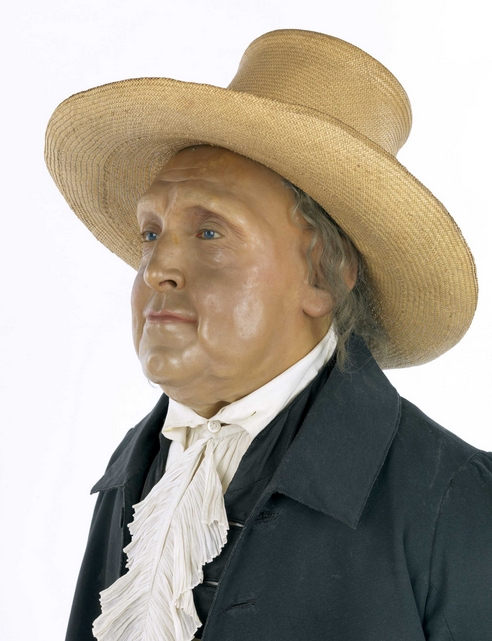 The memorial may be a little paradoxical for a thinker who was so ardently vested in the future, but is a strangely apt icon of democracy which has come full circle and seeks sovereign leadership whilst celebrating the 'selfie'. That he slept in a damask-hung bed intended for Queen Anne, who died before her planned visit to the West Country, has a delicious whiff of irony. 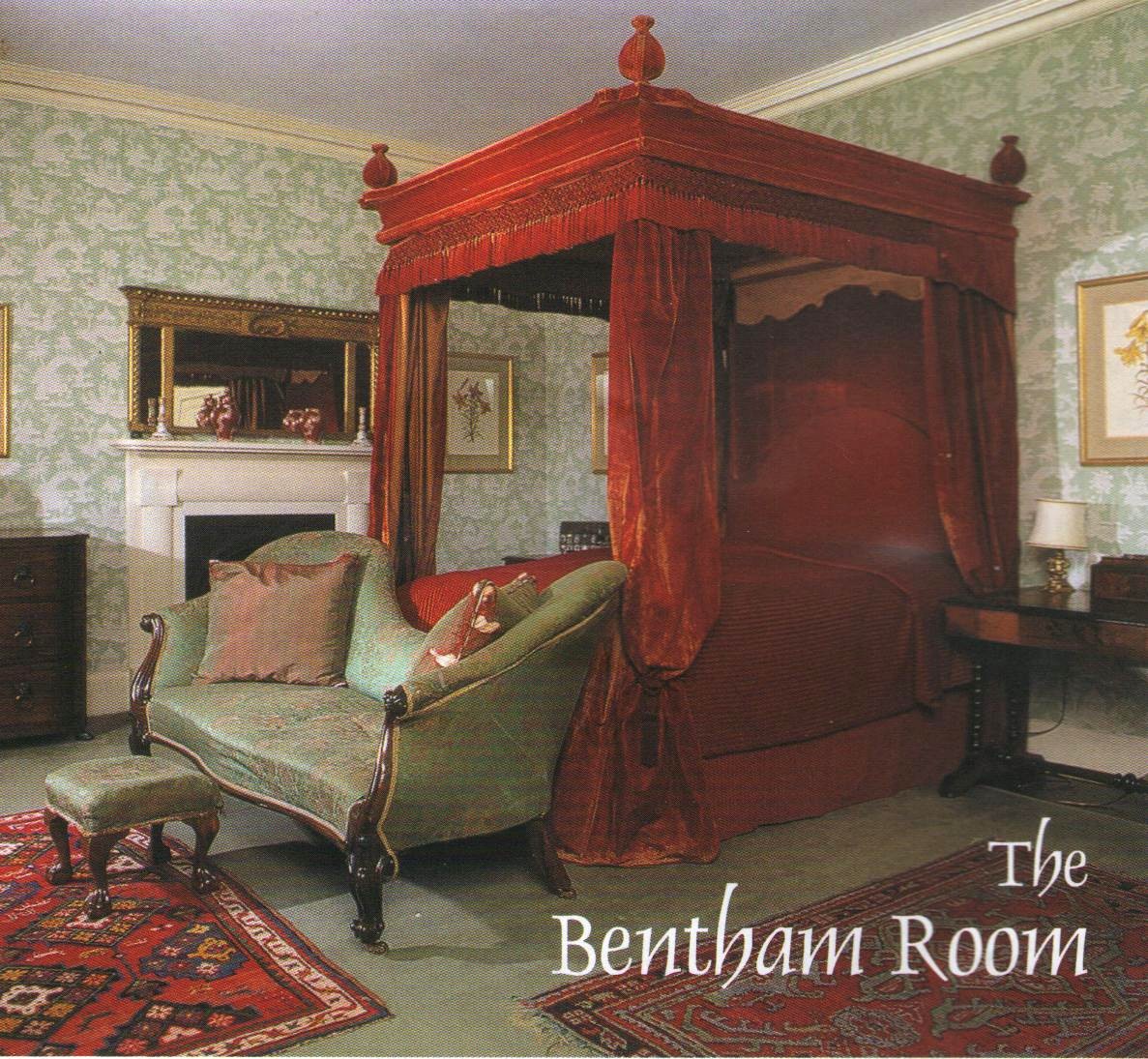 The Bentham Auto-Icon at UCL