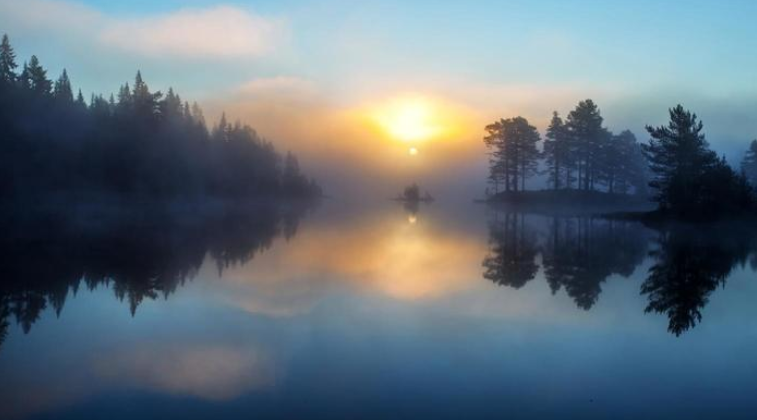 For our honeymoon, he had taken me to Norway. He was anxious to show me the Land of the Midnight Sun. After the wedding celebrations, when the piped lace on the cake, worked with agonising patience, had disintegrated, I would have preferred to linger for a day or two in a more familiar landscape. I would have preferred the calmer shores of Suffolk to the North Sea. I could dip my toes gingerly in at the water’s edge along the solitary waste between Southwold and Leiston-cum-Sizewell, barbed with the horny limbs of crustaceans out of joint with their shells and twice the size of those on many a coast. I would have liked to walk barefoot and free for a day or so, making shallow impressions that could easily be effaced by the tide. But he was eager to cross the water, said if we missed the boat we’d have to wait days and days, heaven knew how long it would be, and the honeymoon would be over before it had begun. So we spent our wedding night in my bunk, in a cabin, in a boat out at sea. I embarked in a wide-brimmed hat adorned with ribbon. “Your mother chose it,” I confessed with an apologetic laugh. “She said I ought to wear one. It’s the done thing.” “It is now,” he joked and whipped it off and tossed it over the rail, leaving me suspended between laughter and tears. I watched it billow and float, billow and float, receding towards the misted harbour of Newcastle. When I met his eyes then, I knew it was for real, not a dream effervescing into nightmare. Intensely pleased with himself, he gave me a fulsome kiss, there and then on the deck in front of everyone. Folk exchanged glances, smiled indulgently. Our new clothes and the pastel confetti fluttering out of our shoes gave us away. Middle-aged women searched my face for signs of preparedness, recalling grim nights of betrayal. In their day, nice girls definitely didn’t before the ring. I could see them thinking ‘poor girl, on voyage, too,' when the mere fact of being at sea could so easily overset one’s calm. 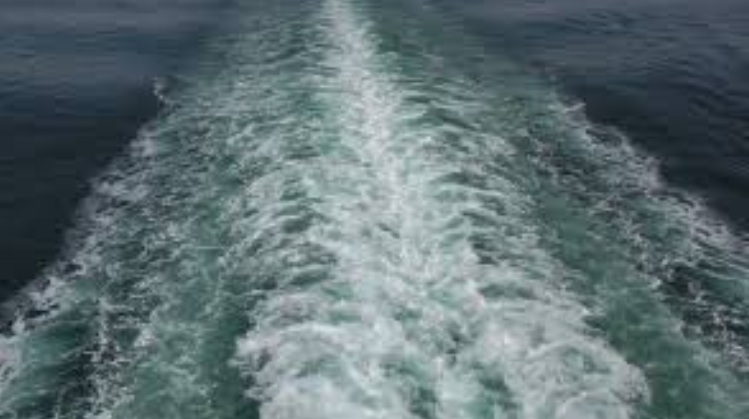 We stayed out for a long while, watching the ploughed foam disperse and marble the lucent green water. It grew dark. The boat begin to dip and rise.

But later, in the confines of the bunk, it was easier to forget you were all at sea with the sun gone down and the blinds drawn over the porthole. If the context was slightly dramatic, it seemed fitting, conducive to success. Intertwined beneath a blanket embossed with seagulls in flight, we discovered that we were after all in love. In the night, in the middle of the crossing where the water was deepest and the swell exaggerated the motion of the vessel, I realised with a burning twinge of that legendary pain, that I was not alone. I began to bubble softly with laughter at the facility with which my secretive body adapted to new rhythms. Touch and go, ebb and flow. Capering, scarpering. Deepening, sweeping up to a crest; acquiescence, quiescence. Sleep, drowned in a tide of radiant blood; lulled, both, by the ceaseless vibration.

In the morning, I peeped through the porthole and reported that there was still no land to be seen.

“It’ll be within sight any time now,” Jude promised, pulling a sweater over his eyes. And I believed him.

“This is the life!” he enthused, out on the deck after breakfast with spume flying into our faces. “Let’s walk up to the sharp end, shall we? I’d rather see where we’re going than where we’ve been!”

The floor pressed up under the soles of our feet. Jude took long strides, it didn’t bother him.

Faint shadows loomed through an opal mist. “Isn’t it a bank of cloud?”

Gradually a long bare headland slid into view. It looked untamed, remote, belonging to nowhere. It was hard to imagine a whole country beyond. As the boat slipped into its lee, the wind dropped and the waves subsided. Soon another limb of land reached out on the other side. The course was scarcely ruffled now. Were it not for barren rocks jutting out of the water, we would have made rapid progress. Slowly we penetrated towards a harbour we could not see, expecting it to be around the next point, then the next. It was this anticipation that kept us standing there for nearly two hours. (The boat had glided so swiftly out of the dock at Newcastle.) We shuddered and put up our collars. The wind was less fierce, but the cold had built up under our clothes. Crowds gathered on deck. 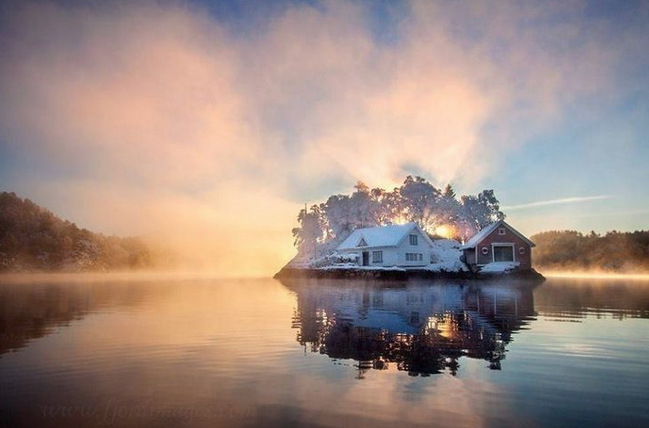 At first there was little to see but the crude extremities hewn by a primeval hand and licked smooth as a bald pate by the sea in places. No beards of seaweed thrived in the ice-sharp air. Further on, brownish tufts of grass sprang out of the crevices; lichens mottled the rocks. I’d imagined it would be greener, but Jude said that wasn’t until you were inland a bit, where the agriculture was. On the coast and up in the mountains it was pretty bleak. The time to see it was in the winter, when it was covered in snow!

Jude had been there before, not to discover the land and its inhabitants, nor even to see the Midnight Sun since it was the wrong time of year, but to ski. He had skimmed and swerved over the glistening surfaces. Everywhere looked like a Christmas cake then, the conifers feather-stitched against the sky. On the fourth day he had his leg in plaster and had to warm himself up with brandy for the rest of his stay.

We began to encroach upon the interior, picking our way through treacherous channels. We saw two or three summer dwellings made of timber, fragile as dolls’ houses, perched in the nooks and crannies of the rockface. They were painted saffron, rust-red and green, all the colours flowing in the rock, so that they blended perfectly with the background. But despite the solid foundation, they looked tenuous, for all the world as if they might topple into the black lacquered water below.

Soon we caught sight of wharves, cargo boats, trawlers heaped with 'silver darlings', and then the outline of gabled roofs pinked against the dark slopes of the harbour. We smelled the saline smell of humanity torn between earth and water, and lost ourselves in the comings and goings on the borders of hope. Romantic Bergen, jewel of the Hanseatic League, overwhelmed us.

An hour later we were ashore, with the homeland of Ibsen rolling hard beneath our vehicle. 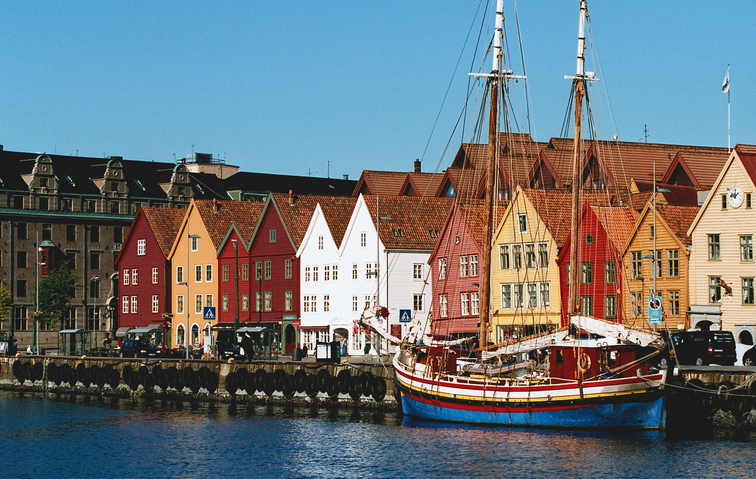