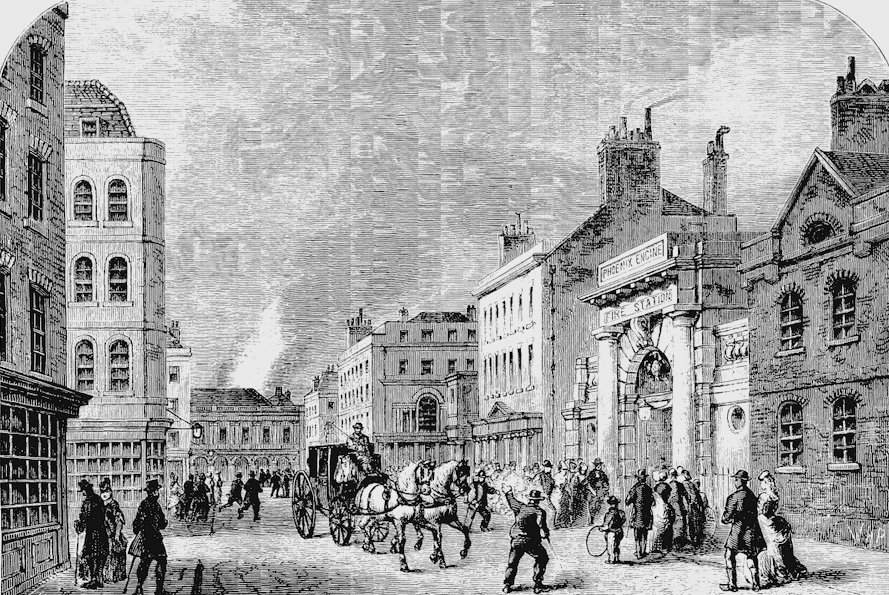 Lily named her son ‘John’ and called him Johnny. John Tudor, Berkeley mused. What did not occur to him, when he trusted Ferryman to officiate, was that Lily would give Fitzhardinge Berkeley as the baby’s baptismal names and them only. Lily sighed with satisfaction, feeling that God was in his heaven and her score with the Earls and Barons of Berkeley was settled. Ferryman thought nothing of it and was posted to the high seas with all despatch whereupon his own concerns took over.

In 1801, six years older and wiser, several shades of cynicism deeper, and now known by her Thespian name of Amy Knight, Lily began to review her position. The press had been buzzing with debate upon the Berkeley Peerage, resurrected, if it had ever died, by the Bill to preserve evidence of the older sons’ rights. While Miss Tudor lately went as Lady Berkeley, the first four of Johnny’s half-brothers had not proved their title to the family honours. The actress had instilled into her son that he was an ‘Honourable’. His father was a lordship who had been set upon by bandits on the King’s Highway and left for dead.

In the following months, as interest in the case waned, Lily decided to grasp the nettle and tender her claim to a gift of property. Her argument would have more weight while there was controversy about the Earl’s lawful heir. Had not Mr Ferryman mentioned that there were rumours in circulation that the Earl and his lady might never have been joined in wedlock. Jane Price, who was in the Berkeleys’ employ for seven years, now doubted the second marriage. “For,”she averred, “it cannot be counted the work of rational minds who are seeking to persuade us of the first rite. Miss Tudor kept her name long after May, 1796, when a further ceremony was supposed to have taken place.”

Ferryman had demurred at this. “To hedge their bets in such a way... They’d be dicing with their lives! I cannot think it likely.”

“You forget, Mr Ferryman, that they are Berkeleys who think themselves above the law. History has favoured them.”

“They would not have the hubris.”

“Consider this,” advised the dame in unnerving proximity, “the baptism of Thomas Moreton is registered in two parishes and only once is he described as Lord Dursley. Make of that what you will.”

“How can you know such a thing?”

“I keep an eagle eye. The pursuit of truth is my life’s endeavour.” 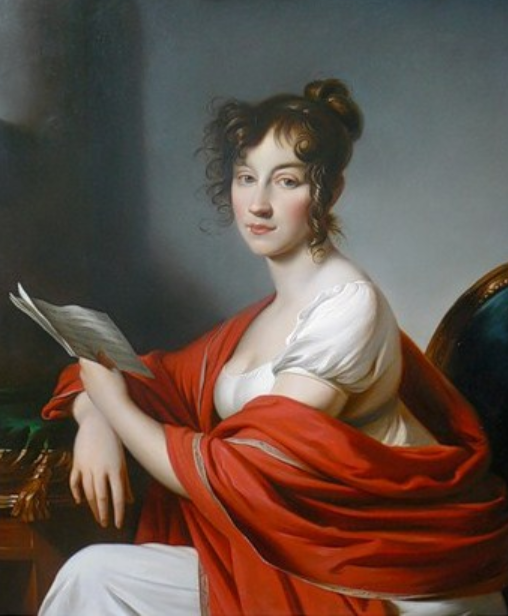 Berkeley was dismayed to find that he had not written off Miss Tudor, nor had he foreseen the involutions of her surname. The tone of her letter smacked of his sister-in-law, Susan Baring. Had he lost one bête noire and gained another? He’d learned the hard way what could be achieved by a woman on a mission! If the Prince of Wales was worried about William Austin asserting a right to the English Throne, Berkeley could not discount the threat posed by Lily Tudor.

The Earl delayed his response because that was what he always did, hoping the problem would go away. Lord Dursley would implant himself in the noblest society and become popular among those with influence upon the House of Lords’ Committee of Privileges. So far, the plan had gone badly. Fitz’s disgrace at Eton had wrong-footed him. He was not lacking in conduct and was found to be witty and talented, but was inclined to misfit expectations. The trouble was that Fitz resented having to make himself conciliatory to those who had downtrodden his ancestors. Though he half-despised his mother for failing to outwit them, he identified closely with her.

As the Earl feared, Lily Tudor was persistent. His historic guilt was his weakness. He agreed to give her title to her lodgings in exchange for a deed of silence and asked Boodle to make sure the negotiations were drawn out.

By now, the persona of Amy Knight had become as comfortable as a well-worn shoe. The actress sat in The Star, opposite her youthful admirer, downing fine wines and enjoying new epicurean delights and began to feel that the turn of events was amusing rather than worrisome. She had had the charge of his siblings when he himself was no more than five or six years old and the epicentre of disturbance. There had been something in her demeanour that incited him to folly even then.

“Faith, I believe I shan’t order more liquor,” he said blearily. “Right now I could do a fair impression of the porter at hell gate!”

“Perhaps your lordship would care to sign the account and leave the favour of an oration until later?”

“Credit’s better than royalty! Ain’t that right? Go with Georgie Boy to the Races and he’ll stake your blunt!”

“If’s a bigger word than when.”

“You castin’ aspersions upon Mama’s virtue? Name’s a good ‘un. Owned it yourself.”

“My son’s is even better. It’s the same as yours!” 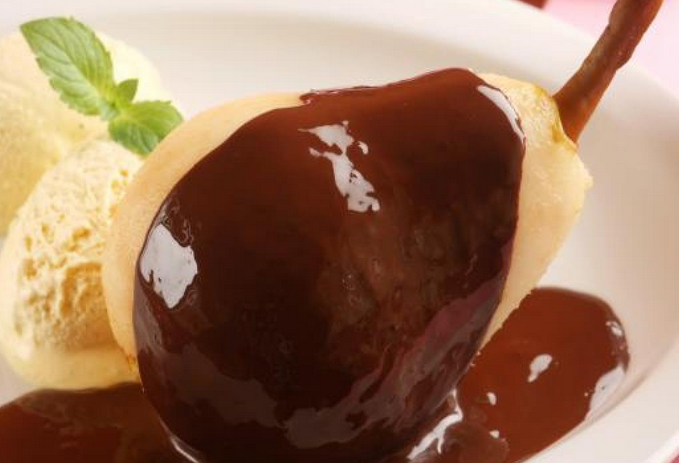 The room swirled into a kaleidoscope. Lord Dursley’s Adonis-like profile was deftly fielded by his poire au chocolat which punctuated the exchange with a resounding clatter, drawing a barrage of stares. Amy jumped up in high dudgeon and threw down her napkin, when the Head Waiter smartly appeared at her elbow.

“I will see a cab is procured, madam,” he said. “I take it milord has no further utility for his dessert?”

In the carriage, she felt the full weight of him slumped against her. He was a basketful of trouble twelve years ago and nothing had changed!

Amy decided against abandoning her charge on the doorstep of Lord Craven’s house in Charles Street and asked the driver to take them to her own address. Johnny lived with her sister, Prudence, in Gloucestershire, and the maid who cleaned the apartment was not expected the following day.

When they drew up in front of Morley’s Hotel, the lamps were burning and the portico doors still unlocked. Amy swiftly alighted and ran into the vestibule, brushing past the liveried doorman.

“May I be of assistance, madam?”

“Oh dear, this is singularly awkward... My cousin, I fear, has partaken a little too much refreshment and is unsteady on his pins. Would you be so good as to see him installed upstairs, I wonder?” The maître d’hôtel appeared in the hallway at that moment. “Ah, Joseph...the very man!”

“Miss Knight!” Joseph Ball from the Cotswolds clicked his heels, only wanting an excuse to render the lady a service. He had followed her to London and was biding his time, confident that the society of feckless suitors would pall. An ambitious fellow, he had set himself to learn the hotelier’s trade from bottom to top when he might satisfy himself that he ranked with the Quality. An aproned porter was instantly summoned to assist the doorman and between them they succeeded in hauling Lord Dursley up the private staircase.

“Plimmed a barrelful, this one,” muttered the porter. “Like shifting a trunk full o’ lead.”

“Pickled as a soused herring!”

Amy produced the key and paid off the cab from a cache of notes she discovered in Dursley’s inner pocket. Tripping upstairs, she found him in complicit oblivion on her drawing room couch. He was snoring like an old salt, fit to make the chandeliers tinkle, yet how boyish he looked.

The night shone clear above the roofs of Westminster when she thankfully retired to bed with sighs of vexation at the folly of the male species. 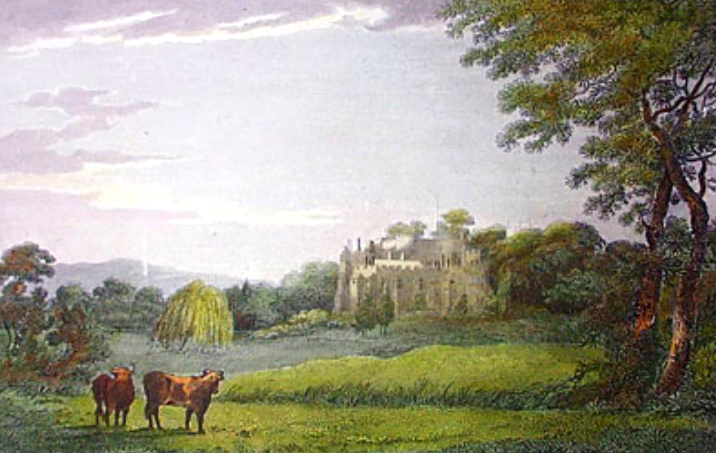 No one had thought to close the curtains for the guest. Next morning, the sun began to gild the architecture of Cockspur Street and glance off the mirrors of number twenty-five. The Viscount groaned, torn from sleep with a searing headache, and struggled to orientate himself. He did not recognise the room, had no idea how he came to be there. He seemed to be faintly acquainted with his clothes; his hair smelled of syrup and chocolate and wine…? The figurines on the mantelpiece, the silhouettes on the wall, the flowery chintzes, were unfamiliar. But the gold-framed landscape above the fireplace limned the outlines of his home, rising above watermeadows foraged by shaggy, longhorn cattle. Berkeley Castle! As his focus became steadily adjusted, he discerned two smaller pictures of the town, the Chantry where Edward Jenner lived, and the towerless Minster which his father called a tabernacle of the ungodly. He started up, clutching his throbbing brow, for that was surely a portrait of himself next to them! A miniature done when he was a child. Those tetchy artists! The tedious sittings for minutes together!

He did not hear the door open gingerly, nor was he aware at first that Amy stood silently behind him, turned spectator now.

“A handsome taking, is it not? To the life!”

“Where...” he said, stumbling back to bewildered reality. “Where did you get it? Did my mother give it you?” 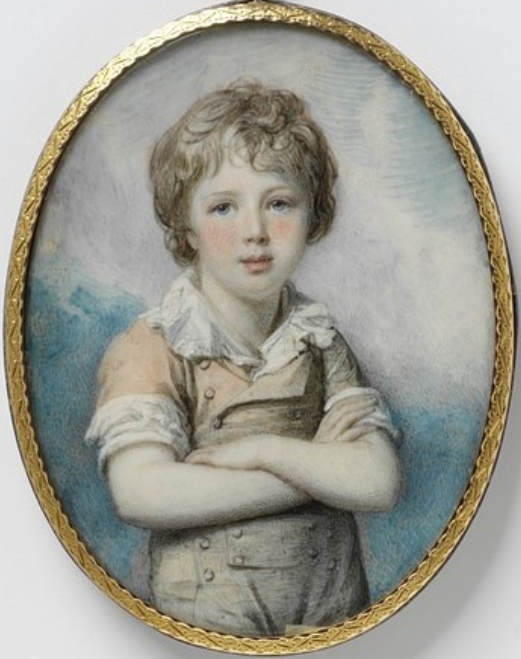 Last of a linked six-excerpt sequence that begins here

THE SHEEP AND THE GOATS, Second Book in the Berkeley Series