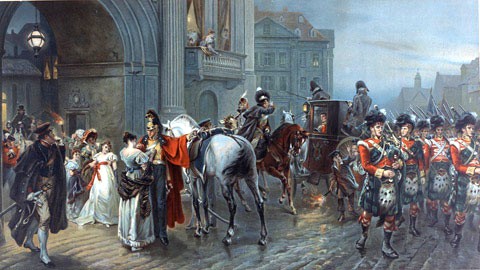 Lavender-grey dawn spread over a city in ferment.
Assembly bugles sounded the clarion-call. Drums beat a tattoo that throbbed in the blood and brain. All over Brussels, soldiers tumbled out of billets, half-dressed, steeped in sleep, their knapsacks thrust over their shoulders. Officers scurried from the Rue de la Blanchisserie in their dancing pumps. Sobbing wives, clutching round-eyed infants, others clinging to their skirts, thronged the Place Royale where the regiments were forming. Sweethearts pressed amulets into the hands of their lovers. The Square was ablaze with infantry uniforms, contrasting the Blue of the Horse Guards and Light Dragoons, the dark green of the Riflemen, the black of the Brunswickers. The Scots Greys, far from ben and burn, rallied to the pipes of their homeland. Privates bustled about loading up baggage-wagons and supply carts with sacks of corn, nosebags, horseshoes, bandages, gun carriages with arms, canteens with fresh water, gin for the privates and brandy for the officers and a modicum of port wine for the Duke. Unlike Napoleon, whose soldiers had to fend for themselves, Wellington held the view that his army marched on its stomach and he took good care to feed it. The penalties for foraging were severe.
Entangled in the mêlée were the market stallholders whose carts always came jogging into town before civilised folk were abroad. Old Flemish women in black shawls and skirts leaned on great baskets of potatoes and turnips, strawberries and lettuces, and gaped at the noisy incursion this Friday morning, causing some colourful vernacular among the troops.
General Peachum rose at four-thirty and partook of light pastries and strong coffee before he left. “Lock up the stables. Keep a guard on the horses, m’dear,” he said cheerfully. “If we don’t make short work of Frog, you’ll need ‘em.”
Robert had no time to say good-bye to his aunt. Leaving the ball, he made straightway for the Place Royale in search of Colbourne. Anne, Kate and Mr Fenton, caught up in the drama, rode with him in the carriage, jostling its way through the beleaguered streets. Residents waved and cheered from wide-open windows.
“Only fancy,” Anne said, “a year ago we were all rejoicing over the Peace. Uncle Henry described scenes such as this when the Sovereigns came.”
Kate thought of London last August, with Edward Grey and the Stewarts. How long ago and far away it seemed. She was so fretted by emotion and lack of sleep that detachment engulfed her. Yet everything appeared to her in explicit detail. Today would be forever graven upon her memory.
Reaching the Square, they alighted and took their leave of Robert. He hardly belonged to them now. Fenton shook hands with him and wished him in clover; the girls hugged him. They watched him thread his way through the crowd and join ranks with his comrades. Some of the regiments had already marched away, others were poised to commence.
The English cavalry was finely caparisoned and mounted on the purest bred horses in the world, Lord Edward Somerset’s Guards in burnished helmets sporting curved plumes.
“There are the Blues!” Anne burst out, eyes peeled for the gallant Captain Mottram. “Come, let us move closer.”
Kate followed her. In the multitude it was hard to keep in contact. “Tell me,” she said, panting for breath, “which are the King’s Dragoons? Are they here?”
The answer came from an unexpected quarter. “Indeed, ma’am, they are!” affirmed a debonair officer against whose back Kate had brushed. He had on a crested helmet. Two gold epaulettes stood proud upon his shoulders. His crimson coat was heavily braided and bore a crown badge of rank. A white sash, breeches and spatterdashes, black boots with brass spurs and a gleaming scabbard completed the regalia.
Touching the peak of his headgear, he turned to confront her and great was his stupefaction. Her heart sang for joy.
It was Leo! 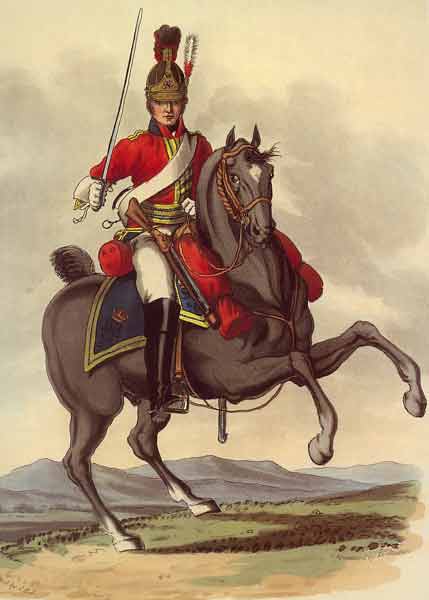 Lieutenant-Colonel Penrose, 1st Dragoon Guards, was speechless. Afterwards he could not be sure that something in Kate’s voice had not registered subconsciously. The next moment she was being squeezed against a colonnade of bright buttons. “Kate! My life! What in the name of all that’s sacred are you doing here?”
“I’m staying with friends at General Peachum’s house,” she gabbled excitedly. “Your letter did not reach me until yesterday. Oh Leo!”
“To think you’ve been here in Brussels and I didn’t know…” He took in the significance of her evening gown, the train which had been draped over her wrist now slithering down to the cobblestones. “You have been to some splendid romp by the look of you!”
“I’ve been to the Duchess of Richmond’s ball!”
“Have you, by Jove! I wish I’d been there!”
He sought her left hand and satisfied himself that the fingers were unadorned. “So I still have the pleasure of addressing Miss Hanslope.”
She became suddenly serious. “Leo, you remember our first night in Brighton?”
“I had rather remember your first night at Silvercragg,” he teased in an undertone. “But yes, I recall it perfectly.”
“You told me that when you returned from the Peninsula, you had no one in England… No one to care…”
“It is no longer so,” he said earnestly, tilting her face upwards. Clasping her tightly, he gave her a desperate farewell kiss. A bawdy cheer went up from some of the cavalry mounted behind him. An audacious sergeant yelled: “Give her one from me, Penny!” which had the company within earshot in an uproar. Lieutenant-Colonel Penrose wished them at the deuce and told Kate he must leave or there would be a breach of discipline in the ranks. He planted another kiss upon her brow. “Keep your spirits high.” Then, receiving the reins from a groom, he swung himself into the saddle of his charger and hailed a hopeful young cornet. “Horner!”
“Sir?”
“See that you capture an Eagle for this lady!”
“Yes, sir! Begging your pardon, sir, would it be worth a captaincy?”
His lordship grinned. “Damn your impudence, boy! You’ll go far!”
The stragglers had been whipped into line and the cavalcade was on the verge of departure. On an impulse and in defiance of the proprieties, Miss Hanslope proceeded to lift her skirts a fraction and rip a length of white lace-edged ribbon from her petticoat which she tossed to her lover amid a chorus of whistles. It was most decorously contrived. “Farewell, soldier. Farewell! Put Boney to rout and come back safely.”
Leo touched the fluttering lace to his lips and looped it through a buttonhole. “My oath upon it, lady.”
“I’ll marry you, sir, if you do!”
Leo let out an unashamed whoop of delight. The line lurched into motion as he snapped out his commands. “Au Revoir, then, Kate. Au Revoir, not Adieu!”
So, setting his face towards combat with that impatience for action which women never understand, he moved off and did not look back. Kate stood stock still while the regiment filed past, harnesses jingling, accoutrements flashing, in the background the menacing beat of the drums, the shrilling of fifes. Down the Rue de Namur the cavalry went, through the Namur Gate and out into the pastoral countryside of Flanders where the sun was rising. Larks sang high in the celestial blue and all thought of war was remote.

Early on Saturday morning, the muted reverberations of the firing started again. As the day passed and the heat became intense, a steady band of wounded soldiers staggered back to the city, many falling exhausted to die by the wayside. At the Namur and Louvain gates, tents were erected to treat them, blankets and pillows requisitioned and any old linen that could be torn up for bandages. The good burghers of Brussels threw open their homes to all and sundry and the apothecaries’ shops supplied dressings free of charge. Society ladies rolled up their gauzy sleeves, donned pinafores and toiled alongside their femmes de chambre to bring relief to the suffering.
Every so often a contingent of cavalrymen, Germans or Netherlanders, would come charging into the town on foam-flecked steeds, scattering whatever lay in their path and crying that the French were at their heels.
Panic grew. Everything on wheels and hooves was sought out by the timorous whose ranks were hourly multiplying to add to the same confusion as the day before.
It transpired that the British were withdrawing, still fighting, to the valley south of Waterloo. Unknown to the defeatists, it was exactly what Wellington had planned.
The heat was suffocating. Not a breath of wind stirred the air. By late afternoon, anvil-shaped clouds the colour of bruises, darkened the sky.
Huge drops of rain began to rebound off the dusty, blood-stained cobbles.
The heavens opened. 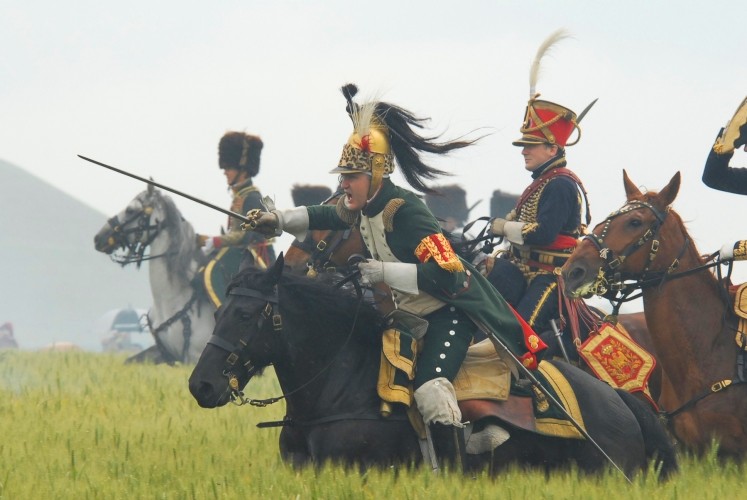 All night, water cascaded down as though from great vats to drench just and unjust. Sulphurous streaks of lightning forked the darkness. Both armies slept out in a quagmire, under cloaks if they were lucky and amidst the flattened rye. Seasoned campaigners smeared themselves in clay and spent the night in relative comfort.
At the village inn at Waterloo, which Wellington had made his base, he was disturbed at two in the morning with a message from Blücher. The intrepid old Marshal, so beloved of Londoners the previous summer, instead of fleeing east along his lines of communication, as Napoleon had supposed, had marched north to Wavre. He told the Duke that he was prepared to join him as soon as possible with what forces he could muster.
“Then we shall do the business today,” Wellington informed Lieutenant-Colonel Gordon, his aide, with martial resolution. “We shall stand and fight.” 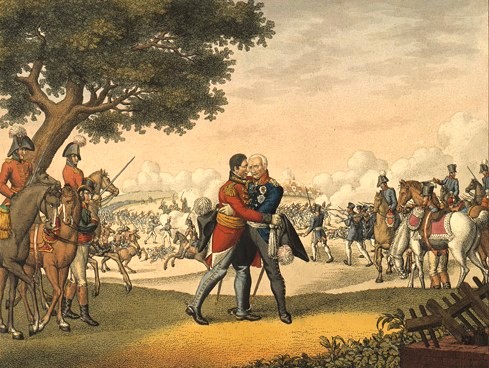 from MY MOTHER BIDS ME, A Novel of Jane Austen's England on the Eve of Waterloo