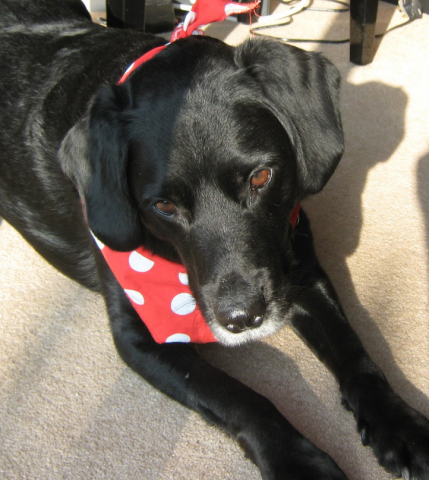 El Springador celebrates his prime on a very special occasion.

I have pawsed the high-octane adventure that is my life to let you folks know that today is my birthday. I'm five! Thirty-five in dog years – the canine calendar runs on bobbins – neither Pup Gregory nor Caesar (the fellow who invented canned dogfood) could get the hang of it.

Einstein, of course, came up with his major breakthrough based on knowledge of Springadors:

And I taught him all he knew about Black Holes, but not where they were located! Or wot they were for! Better whisper it low; mustn't get Herself started on that one. She's been missing a memory stick for a while now. I think we probably can't keep putting it down to a Spinone moment, or the onset of Alsatians. The thing is, you see, I read in the nosepaper about this dog-bone shaped asteroid they've discovered up there. If it should land in my patch, I need somewhere to bury it.

She's fully convinced that I'm also the genius of Chaos Theory when scatter cushions go AWOL and my rubber DNA toy is fielded by the nest of wires behind her computer. I keep telling her it's all on account of some Chalkhill Blue batting his wings up on on the South Downs - actually saw him once, right under my nose, looking for a pollen pad to land on - but will she have it?

Now go on, admit it. The world's still barking mad, but it's been a better place since July 10, 2004, when Dog put a spaniel in the works to set about uprooting unwanted Bushes. I'm good at that. Roses are a bit tricky, but dahlias come out a treat and I quite like the taste of camellias. I've been in the doghouse (again!) - just as well I've got my own little brick-built paw-de-terre in the garden where I can chill out – because I crashed into a blooming clump of her treasured arum lilies chasing off a hedgehog. They'd never let me in at the Hampton Court Flower Show!

Wot a life, eh? I just love every moment. And birthdays give you an excuse to create real mayhem!

Jack, the dog who keeps track of the plot